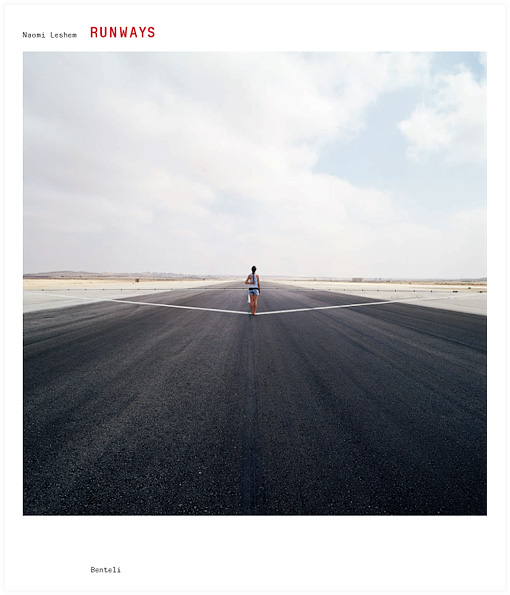 “Runways” (Publisher: Benteli Verlag, Switzerland. Ed. and texts: Peter Röllin, Michael Guggenheimer) addresses disappearance and death in sites of personal loss in Israel’s landscape. These are images of ambivalent beauty, so close to both life and death. In these photographs, which she took with analog cameras and printed in square formats, the photographer Naomi Leshem, who lives and teaches in Tel Aviv, tells stories of disappearance and death. A road in the Arabah Desert where a young woman died in a motorcycle accident. A place in the Negev Desert where, despite a twelve-hour trip by car, parents drive several times a year to mourn the loss of the their son. Or the Sea of Galilee, where a military pilot lost control of his plane and crashed at top speed into the water’s peaceful, deep blue surface. Leshem searched for such sites of disappearance and death. With their roughly scraped, pitch-black tire marks, these “Runways” also represent moments of stillness in a fast-moving age that forgets death. Like memento mori, they are symbols in the midst of life and its always incomplete transience. These pictures run and rush toward death and its inevitability, thus forming, like natural changes, a new experience of life.